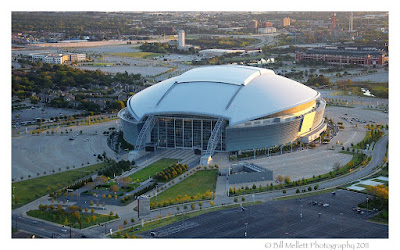 I’ve yet to actually enter “Jerry’s World” but, I certainly find it impressive from outside.  We bought tickets to Taylor Swift’s performance for my daughter for her birthday.  When my wife and I went to pick our daughter and her friend up from the performance we parked in one of the lots and walked up to the building to wait outside for them.

The building has huge sets of window that they had blocked off with huge black curtains inside so that people would actually pony up the ticket price instead of just party outside and watch on the big screen.  It probably also helps with the show if they can darken the room down.  We were able to peek through a probably six-foot gap in the curtains to watch the action on one of the “small” side jumbotron (oxymoron alert!) screens.  We were watching probably a 30 foot across high-definition T-Swizzy performing live.  It was pretty impressive.

It’s pretty impressive from the air, too.  I almost didn’t photograph Cowboy’s Stadium.  I had an early morning flight planned out to photograph the Dallas skyline as the sun was rising. I usually like to stick to whatever plan I have as much as possible.  After I was done with downtown Dallas, I was flying from the east, south of the DFW airport restricted airspace when I noticed the whole Arlington, Texas area being bathed in early morning light.  Nice little surprise!

Arlington is really the playground of the Dallas/Ft. Worth Metroplex.  I think that all of the local folks know that Arlington has Cowboys and Rangers stadiums as well as 6-Flags amusement park and Wet-N-Wild water park but, from the air you get to see all of it at the same time.  It looks like one big playground, which it is.  It was fun to shoot, too.