Bovine in the Mist 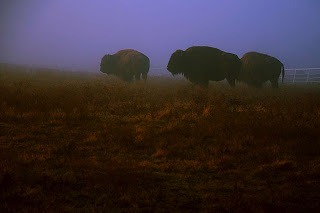 I regularly drive past some fields where cows and bison are kept. I’ve often thought, y’know, I aught to photograph those bison while they are still in the fields and not sitting on my burger bun or the land is converted into yet more housing.

One of them in particular usually has bison and it is on a slope facing up towards the sun rising in the east.  The long shadows during the “golden hour” in the morning sometimes provides some cool situations to photograph.

I got lucky this past Wednesday morning.  The bison were where they belonged, the sun was in the right position, I was going into work early, so I had time and there was a neat fog on the ground.  Ground fog might not sound like much but, we don’t get that condition here a lot.  It’s kind of like finding longhorn cattle in Connecticut.  It might happen, but not often. 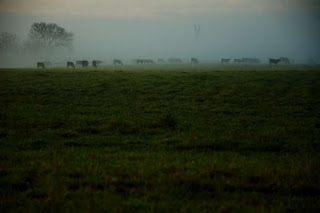