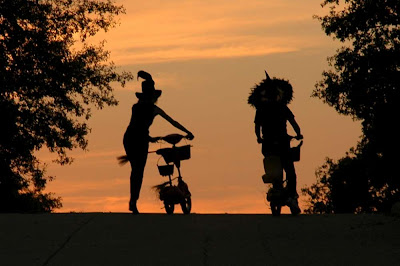 Ever since I started blogging I’ve been waiting to post this photo from a few Halloweens ago.  This is one of my favorite photos.

My wife and her friend Leslie went around as witches on their electric scooters handing out candy to kids.  The electric scooters were a little mojo challenged, so they had to walk the scooters up our hill.  The hill peaks right at the point where I took this photo.  So, I had the open sky from the angle where I was standing in the middle of the road down the hill a bit in front of our house.  The light and the timing could not have been more perfect.  They went out just as the sun was going down and there was an orange glow off of the clouds.  Our road also happens to face to the west in the direction of the setting sun.  So, it all came together.

I realized this all after I had snapped the shot.  This was done purely on reflex.  I saw their silhouettes against the cool sky and bang, bang, bang I fired away a few frames.  I realized afterward right away that this had potential and I just hoped that one of them was in focus and that I hadn’t done anything stupid with the exposure settings.  I was really glad when I saw it on the computer monitor a few minutes later.

They’ve since upgraded their brooms to gas power.  So, we’ll see what this year brings.