The Streets of St. Johns, NL 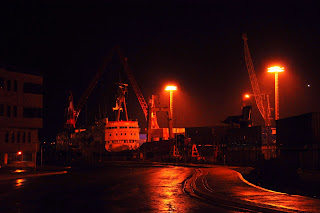 It rains a lot in St. Johns.  This is St. Johns, Newfoundland, not San Juan, Puerto Rico.  Whereas San Juan is remarkable for its sun and beaches, Newfoundland is an island about the size of Texas hanging out in the middle of the North Atlantic like a big green iceberg which is remarkable because it seems to have large chunks of the North Atlantic just hanging airborne over the island in cloud form most of the time dumping that moisture back to earth.

I always look forward to jobs in out of the way or unusual places for their photographic possibilities.  This wasn’t looking good so far.  No car and rain, rain, rain.  I was to only get one opportunity to take any pictures in St. Johns.  After two days my SD card was as empty as the day I landed there.

I found out when sunrise in St. Johns would be then planned to be out of my hotel room about half an hour before then.  (I’m such a photo-nerd, thinking back on it now.)  “Sunrise” was to be kind of an optimistic misnomer because it continued to rain heavily steadily and the prospects of seeing the sun at all that day were not great.

I understand why armies make their soldiers get up at God-awful hours and perform calisthenics.  There is a special kind of mental hardening that takes place when you train while others are sleeping comfortably.  Forcing myself to shoot in bad weather, limited geographically by walking distance, wet, cold and trying to make something artistically out of nothing was going to be my form of morning exercise. Actual calisthenics probably would have been more heart healthy and less cold.

Every place has its own charm if you are willing to go out and find it.  In the case of St. Johns it came in the form of the gingerbread houses that lined many of the old streets, many of which were probably built before the turn of the previous century.

The new age technology street lights cast out a display of subdued chemically colored lights at night.  Just like adding various chemicals changes the colors of fireworks, the different technologies that use different chemicals makes the lights have different color casts.  The early morning light provides a nice balance of natural sunlight to the greens, blues and pinks from the periodic table of elements colors in the newer lights as well as the dingy yellow from the old fashioned Edison lamps.

The human eye doesn’t notice the color casts as much as a camera does.  This is kind of a cool artistic trick to make the scenes more surrealistic due to the highly saturated colors.  Timing is everything to being there when the light is balanced just right. 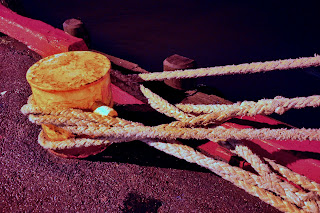 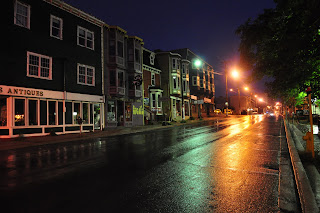 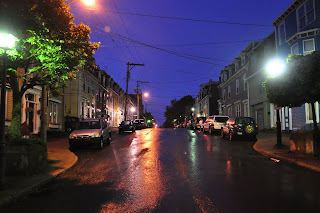 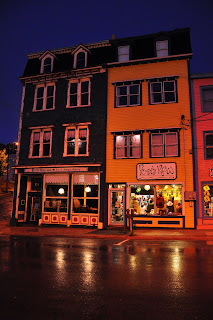