Alaska is easily one of the most incredibleble places that I’ve ever been. I’ve been there twice on business. 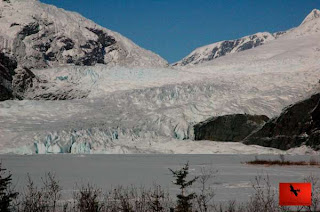 When I was in Juneau I went out to the Mendenhall Glacier a few times. This was winter so the lake by the glacier was all frozen over. The local people; mostly moms with kids would go to the lake, strap on their cross country skis or skates and push a stroller along in front of them. Some brought their dogs with them usually off of their leashes.

There was a sign posted that said that there was a lone wolf in the area. I was chatting with one of the park rangers at the visitor center there and she told me that the wolf was probably kicked out of the pack by one of the alpha dogs and is now looking for a new pack. So, he would try and hook up with the lo 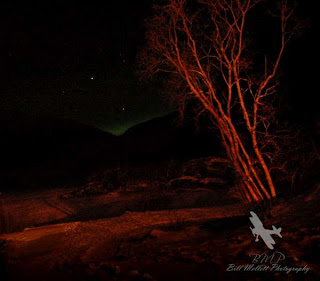 cal dogs that came to the park. The only problem was that when the wolf got hungry then he would sometimes eat the park goers’ pets. A domestic pet is no match for a wild wolf.

One of the local guys told me that he had seen the northern lights from his deck the previous night around 10pm and that usually if you see the northern lights at a particular time one night then it is likely that if you are going to see them the following night that they would likely be visible around the same time.

So, I went out to the Mendenhall Glacier at 10pm the next night with the goal of seeing and photographing the northern lights. Who knows when or if I’d ever be back here again?

It gets really cold at night in the winter in Alaska. The trash cans are also bear proof which means that there are bears in the area. So, I’m hanging out outside in the middle of the night, in the dark, where a wolf has been hanging out near the trash cans that the bears like to try and get a meal out of hoping not to run into any of them.

The best that I saw was a green glow coming from above and behind the glacier and the mountain behind it. It was still pretty cool. I had to take LONG exposures of it. Some of the shots came out pretty cool, I thought.

Such a wonderful place! 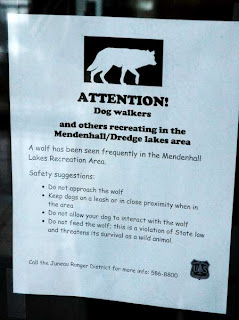